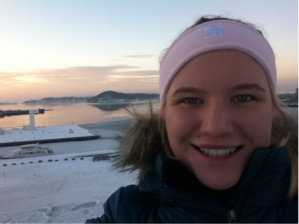 Imogen Hines is a third year Bachelor of Science (Immunobiology) student at the University of Sydney and resides at The Women’s College.

Opportunities in science are famously hard to come by. I had meticulously planned applications, interviewed for positions and was eagerly waiting on the outcomes when this seemingly vague e-mail found its way to my inbox. Having taken some psychology units as electives, it was possible to attend a program run by the University of Bergen, in Norway for students from all over the world. USYD was offering scholarships for some of its students to attend courses in medical and cross-cultural psychology. Exams were coming up and the application process seemed like a fantastic way to procrastinate, so I applied and almost immediately forgot about it.

That was until a little later in November when an email arrived congratulating me on being the recipient of a USYD Exchange Scholarship. It was confusing, given I wasn’t going on exchange. Then the, “you’re going to Norway in a month” email arrived and I couldn’t believe it. Suddenly I regretted applying. It was 2.5 months in a dark and freezing Norwegian winter, with unfamiliar faces. I had nowhere to live and hadn’t even booked flights. Over the next month my emotions oscillated between unbelievably excited and absolutely terrified.

In the end it was the most amazing experience. We got the chance to understand and investigate how culture impacts the way we treat patients – as an Australian, in Norway, being taught by a Ghanan and making friends with people from Mexico to Yemen. Not only did I get to learn about the huge impact that culture has on the way we communicate, but also got to experience it first hand; the Dutch were so truthful and blunt, the Spanish so elusive. There was a strong emphasis on the relationship between physical and psychological health that culminated in interviewing a clinically diagnosed hypochondriac.

In the end, you can seek out all in the opportunities known to man, but sometimes it is the ones that you could never have planned for that turn out to be the most formative.

One thought on “Opportunity: A set of circumstances that make it possible to do something amazing”