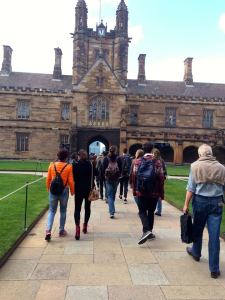 Emma Castle is a 1st year Bachelor of Science student at the University of Sydney and a resident at The Women’s College. Emma hopes to major in Neuroscience.

After 13 years of schooling, a hectic HSC year and 3 months of holidays. I was ready to head into the “real” world. University. A place of uncharted territory and I was diving in headfirst.

During my last years of school I told my parents that I wanted to study science at university. They both had studied economics degrees at Sydney University and their only words were “ you know that is a lot of hours,” and boy did they mean it. In my first semester I had 23 contact hours a week and that certainly kept me busy with lectures, labs and tutorials. The style of learning at university is very self motivated and was quite different to the structure of high school, so it was a difficult at first to adjust. By the time I got into the swing of things, semester was over and exams were approaching.

Doing a first year science degree I do a variety of different science subjects such as maths, chemistry, biology and even psychology to have a basic foundation for my second and third year studies. I like how university shows the collaboration of the different sciences, explaining how that each science isn’t actually pigeonholed into one area but rather it all interacts. I also like the problem solving aspect of the course, where you learn to think for yourself compared to school where you are spoon fed information.

Since moving into The Women’s College, it has made the transition to university so much easier. I have met so many people through various college activities such as O-Week, choir and basketball. I have many friends doing science degrees at college, which form such a great support base when it comes to understanding content as well as venting about a subject.

I’m looking forward to this semester so I can keep building on my base of knowledge from first semester. I’m also excited for second year where I can finally delve into my areas of study for my major.