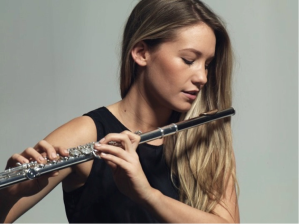 Chelsea Witham is a second year Bachelor of Psychology student at The University of Sydney, and intends to complete post-graduate qualifications in Clinical Psychology. She has previously completed her Bachelor of Music majoring in Flute Performance at the Conservatorium of Sydney, and continues to perform regularly as a casual musician with the Australian Opera and Ballet Orchestra. She is currently a Resident Assistant at The Women’s College.

Upon leaving school, I never imagined I would study anything but music. Although I had considered pursuing a health-related discipline while at school, my dream of becoming a classical musician always seemed to crowd out everything else. After successfully auditioning to study at the Conservatorium of Music, I dedicated myself wholeheartedly to becoming an orchestral flautist.

In my third year of study, I successfully auditioned to be part of the Sydney Symphony Fellowship program. Through this opportunity I was lucky enough to perform as a professional flautist with the orchestra. My first ever performance was playing Beethoven’s famous Fifth Symphony in the Opera House as second flute, which will forever remain as one of the most incredible experiences of my life!

After playing in a few concerts with the SSO I started to gain a feel for what kind of life I would have as an orchestral musician. Despite loving every minute, I have always also been incredibly passionate about medicine and health, and began to feel that that limiting myself to only being a musician was not what I wanted for my life. I was equally excited to gain expertise in a health-related field where I could expand my knowledge, my opportunities for work, and ability to undertake research. After speaking to various medical and psychology professionals, I fell in love with the idea of becoming a psychologist.

Upon the completion of my music degree, I applied to study psychology at Sydney University and was overjoyed to be accepted into my second Bachelor degree. The transition to Psychology from music certainly hasn’t been easy. The performance-based nature of my previous study meant that I was not used to writing essays or studying in the traditional sense. Additionally, I was starting study in a field I had absolutely no experience in! Science was very foreign to me, and the introduction of statistics, validity, experiments and report writing was quite overwhelming at first. However, I remained positive and asked questions wherever I could, and am now very comfortable studying a science degree.

Despite its challenges, I wouldn’t change my decision for anything. I have also never felt that I couldn’t pursue both of my careers simultaneously – one certainly doesn’t cancel out the other. In my first year of studying Psychology I also auditioned successfully for a casual position with the Australian Opera and Ballet Orchestra, which has meant that I still can perform professionally while I study.

My advice is not to let people tell you how you should structure your life, because only you can make those decisions for yourself. Ask questions, pursue opportunities, and don’t be afraid to back yourself. If you’re passionate enough, you can make it work – even from one crazy-haired career to another!