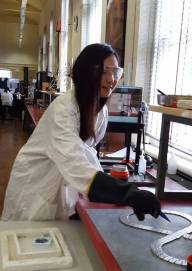 Lily Li is a second year BSc (Adv Maths) student at Sydney university and a resident at the Women’s College. She is hoping to pursue a double major in pure mathematics and physics. Meanwhile, she is channeling her passion for science communication to work as a demonstrator for the Kickstart program run by the School of Physics.

Imagine a future where highly accurate and efficient neurological tests can be performed at the comfort of your couch and coffee table, on your trusty 13-inch MacBook Pro. Thanks to the ongoing efforts of physicists, mathematicians, computer scientists and neuroscientists over the past few decades, that future is more tangible than ever. Amalgamating knowledge and techniques from this diverse array of scientific disciplines, an emerging field known as “Computational Neuroscience” has come to being.

“How do our brains function?” has been a question of philosophical, theological, and scientific debate over a good chunk of civilised human history. Driven by the fascination with this unanswered question, and the fast-paced advancements in computational technologies, scientists have been looking beyond biochemical orientated areas of study in search for an answer.

In the late 1940’s Alan Turing investigated what were called “unorganised networks”, and sought to simulate neural networks with a digital computer. Since Turing’s time, scientists have come to the realisation that the computer’s ability to perform detailed calculations on a large scale renders it the most powerful tool for studying systems that can’t be explained by a unifying general principle. Complex biological systems like the brain would be considered such a system.

Luckily, many biomolecular mechanisms in the nervous system can be approximated with mathematical equations. Once we map out some of these basic mechanisms for neuronal behaviour, we can piece them together to form a network. This network can then model a region, or even the entirety of the brain. In the past few years, several networks that model roughly as many neurons as that of a real mammalian brain have been published.

In the second semester of 2015, I was lucky enough to take part in a research project in the field of computational neuroscience, as a part of the School of Physics’ Talented Student Program. My project focused on manipulating a “simple” network of a few thousand neurons that were able to recreate brain waves characteristic of Parkinson’s Disease, and looked at how we could utilise this neural network in conjunction with a computerised arm model in order to simulate physical movement.

To initiate the perpetuation of interactions between neurons, the network requires input from “other parts of the brain”. Our project took advantage of this very particular aspect of neural network modelling, by investigating the way our model responded to changes in the background input. This allowed us to implement background activity modelled on a Parkinson’s affected brain, and to compare the sensorimotor outputs (e.g. movements created by the arm models) to that of a network driven by healthy activity.

Naturally, there are many ways to form a neural network, by choosing different connection metrics or with different sets of approximation equations. This means that an important theme underpinning all research in the field is the continuous search for models that are more computationally efficient and biologically realistic. The study of computational neuroscience is a reflection of everything we know behind the intricate workings of the complex machinery that is our brain. Apart from creating the opportunity for a non-invasive, cost-efficient future of neurological studies, the billions of tiny circuits and transistors allowing you to read this article might soon shed some light on the very nature of cognition.